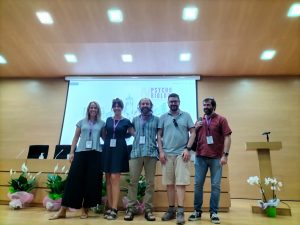 CICS researchers and a student of the Doctorate in Social Complexity Sciences participated in the fourth edition of the meeting that took place between July 20 and 22 at the University of Valencia, Spain.

The 2022 edition of the International Congress of Psychobiology was an opportunity to share the most recent findings on the relationship between the nervous system and behavior in all its facets. In this context, the researchers José Zamorano, José Antonio Muñoz and Pablo Polo, together with the student Daniel Torrico, presented some of their advances in the field.

José Zamorano, Doctor in Psychology and associate researcher at the CICS, directed the symposium “Ethology and Comparative Psychology”. In the instance, researchers José Antonio Muñoz and Pablo Polo presented the results of projects developed by the Animal and Human Behavior Laboratory (LABCAH-CICS).

“In this symposium we present a series of studies that address both the study of aggressive behavior and pair bonding in humans and the study of cognition (theory of mind, memory, imitation) in other non-human animal species, such as macaques, parrots and marine mammals such as pinnipeds, dolphins and killer whales. In summary, based on this variety of papers, in this symposium we offered an overview of the essential information in the study of the evolution and origin of animal and human behavior and its underlying cognitive abilities”, explains Dr. Zamorano.

The academic presented the results of a study that is part of his Fondecyt initiation project (11201224) that studies whether killer whales that imitated actions produced by other killer whales showed cognitive control over their imitation through 1) the introduction of a delay or delay between the observation and production of the actions and 2) the intercalation of distracting actions during the period of delay or waiting for the killer whale to be imitated.

“I believe that the opportunity to organize the symposium and the participation of the other members of the CICS was an excellent opportunity to publicize the work that we carry out in the group both to the Spanish and international scientific community that participated in the congress. In addition, we make it clear that in Chile our group is characterized by contributing with a comparative and evolutionary perspective to the general framework of Hispano-American and European Psychobiology”, underlined Dr. José Zamorano. 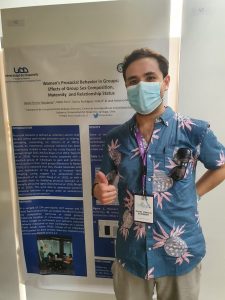 Meanwhile, the student of the class of 2019 Daniel Torrico presented his findings in the poster “Women’s prosocial behavior in groups: Effects of group sex composition, maternity and relationship status.” Torrico highlighted that in his experience as a biologist, participation in the congress “allowed me to be able to learn a lot and further connect comparative behavioral studies and see the link between animal cognition and the behavior of our species (…) Also being able to listen to the talks lectures and the different works was very formative and I learned many things that will certainly help me for the thesis and the projects in which I am currently participating”.