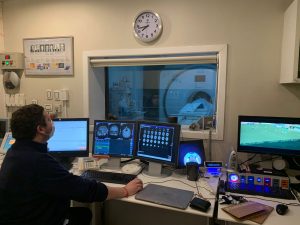 Ph.D. Francisco Zamorano presented the preliminary results of the study that seeks to identify the cognitive and neurobiological mechanisms that act in social cohesion. In particular, he analyzed how the brain of fans behaves in the face of the victory and defeat of their teams.

In modern society, people organize themselves into different social groups, from which they obtain material, symbolic and emotional benefits. Football, and its fans, constitutes one of these powerful models of social affiliation that Ph.D. Francisco Zamorano began studying in 2019 in the Fondecyt project “Cognitive and neurobiological mechanisms of social cohesion: football as a model of affiliation and group conflict” ( 1190513).

Recently, the neuroscientist presented the advances of the work that seeks to improve the understanding of the role of neurobiological mechanisms underlying behavioral control in soccer fans, and how intra- and intergroup cooperation and competition behaviors vary in different contexts of social affiliation.

“Football is a periodic activity that we cannot ignore, countries come to a standstill every 4 years. Iceland mobilized 10% of its population to see its team in the last World Cup, so the question we seek to answer is: where does this affiliative power come from?”, declared the CICS researcher.

The results of the first part of the study identified the circuits associated with affiliation reward by measuring the brain activity of fans. Using magnetic resonance imaging, they monitored how the brain of the volunteers behaved while they watched the goals of their team (positive) and their team (negative).

He also pointed out that, “although these are laboratory results, and therefore in a controlled space instead of a crowded stadium, the effect on this hub is observed, which allows one to regulate emotions or simply succumb to them (…) That is the power and role of social groups and affiliation. There is also the negative side, which leads to massive violence, and even deaths associated with the loss in football.

This behavior, explained researcher Patricia Soto-Icaza, is related to the loss of cognitive control and its role in social interactions. “The typical and atypical trajectory of the development of cognitive control is not an “all or nothing” process, but rather it is dynamic, multivariate and in constant construction/change/consolidation throughout life”, pointed out the Doctor in Neurosciences.

Cognitive control, he added, will depend on both risk factors and protective factors (conditions that increase or decrease the probability of unwanted behavior), as well as vulnerability (predisposition to develop alterations in the face of stressful situations or events) and resilience (the individual’s ability to overcome adverse situations and emerge stronger from them) of the person.

The project, developed together with the CICS researchers Dr. Pablo Billeke and Dr. Carlos Rodríguez-Sickert, is part of the efforts to understand the mechanisms behind social conflict, using football as a model of affiliation and intergroup conflict, which will ultimately contribute to the development of better intervention and education strategies to prevent conflicts arising from intergroup antagonism.