Through this fund, the Doctor in Social Complexity Sciences will explore how competitive altruism linked to reproductive strategies is. The project, associated with the CICS Animal and Human Behavior Laboratory (LABCAH), stood out for its innovative approach when analyzing these behaviors in mixed groups and in a natural context. 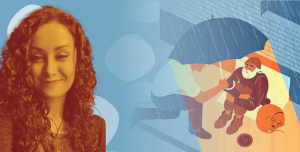 Although altruism is by definition a selfless act, in the study of human behavior it could also be observed as a mechanism to obtain a benefit, such as improving reproductive success. “If you show yourself as a person who has high resources and is willing to share them, you will probably make yourself more attractive as a romantic partner,” explains Oriana Figueroa, who will research this phenomenon in the context of her postdoctoral study.

Doctor in Social Complexity Science, Oriana graduated in March 2021 and will consolidate her career and line of research through the Postdoctoral Fondecyt 2022, awarded with her project “Competitive altruism as a sign of status and the role of reproductive strategies in its expression in men and women.

One of the characteristics of this competitive altruism is that the subject seeks to show himself in front of a group so, for example, the act of charity has to be visible. “Theoretically, men tend to compete more to show them as altruistic, because it affects their reproductive success. Although there is little field research, a study done in Canada found that, in mixed-sex couples, male donations to homeless people were higher when their partner was present than when they were alone or in groups of only women. In short, altruism is like one more peacock feather”, says the researcher.

One of the most interesting innovations of this project is that it transcends the traditional theoretical model proposed for men, by trying to prove that competitive altruism can be a behavior that is observed in both men and women, so they will work with mixed groups. The reason is that, with the current evidence, the presence of this phenomenon in women cannot simply be ruled out by not implementing a design that includes them. This, Figueroa points out, implies an innovation in the methodological design, since it was studied in groups exclusively of men or women.

To measure these behaviors, they will use a game known as the Pairs Game, that allows to measure the generosity and social position of people within a group. Then, they will compare this data with the sociosexuality of the individuals. Thus, they expect to observe a positive relationship between the predisposition to have a non-restrictive sociosexuality and competitive altruism.

A second innovation will lie in data collection in a natural context, which will be carried out with students from Universidad del Desarrollo. “There are previous relationships in these groups, therefore, social capital already exists, there are hierarchies, status and group structures that we can measure. We will be able to compare it with the results obtained in the laboratory, between people who do not know each other, to observe how these relationships are generated”, explains the researcher, who will work with Pablo Polo, a CICS researcher who sponsors the project, and with the Laboratory of Animal and Human Behavior (LABCAH) that belongs to the same research center.

The award of the Postdoctoral FONDECYT will allow Oriana to delve into this aspect of human behavior for three years, which will result in various academic publications related to advances.

Figueroa highlights that the results of her research potentially have application in educational contexts, for example, to prevent bullying situations, since it allows a clear view of how relationships are within a course, and thus prevent conflicts or guide interventions, if necessary. The same could be applied in organizational contexts to set up teams.

“With this work, the frontier of knowledge in the field moves a little more, in personal terms it is an opportunity to consolidate myself as a researcher and, in addition, it is a novel study in South America, since the data we have in similar studies comes from European or American population and producing knowledge at local level can be an important contribution”, concludes the researcher.