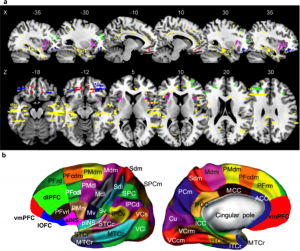 “Approaching reward and avoiding punishment are the two fundamental drives of animal behavior. In principle, both reward seeking and punishment avoidance, could be learned through the same algorithmic steps,” the Nature Communications paper begins. However, researchers warned, different lines of evidence point to an anatomical split between reward and punishment learning systems, in relation to opponent approach and avoidance motor behaviors.

Given inconsistent results coming from human neuroimaging and animal electrophysiology studies, Dr. Pablo Billeke, researcher at the Center for Social Complexity (CICS), along with an international group of neuroscientists, published “Anatomical dissociation of intracerebral signals for reward and punishment prediction errors (PE) in humans”. They aimed to bridge the gap across techniques, recording intracerebral activity from twenty participants while they performed an instrumental learning task.

To do so, patients were required to choose between two cues to maximize monetary gains (during reward-learning) or minimize monetary losses (during punishment-learning). Reward and punishment PE could then be inferred from the history of tasks events, using a computational model.

“What was investigated was decision-making in learning based on punishment and reinforcement, with the advantage that they had many patients with these intracortical records. We contributed to the analyzes and model,” explains Dr. Billeke.

“Yet some regions amplified reward PE signals, and others punishment PE signals. Thus, the dissociation between reward and punishment brain systems is not about the sign of the correlation with PE, but about the valence domain of outcomes (better or worse than nothing). These appetitive and aversive domains correspond to different behaviors that must be learned: more or less approach for reward PE and more or less avoidance for punishment PE. Further research is needed to disentangle the roles of the different reward and punishment regions in these learning processes”, explained the authors.

The partnership with the Grenoble group began in 2013 and, since then, the researcher Maëlle C. M. Gueguen visited the CICS on one occasion and, in the same way, both Dr. Billeke and the CICS researcher Patricia Soto-Icaza carried out extensive visits to their French peers.

This collaboration also generated learnings that, according to Dr. Billeke, could be translated into a new publication. And, as Dr. Soto-Icaza analyzes the data collected during her visit, that work will also strengthen the partnership with the Grenoble group, which has resulted in the following publications: