The research to determine the breeding and reproduction strategies of the social insect Alchisme grossa, through the use of genetic techniques, carried out by the student of the Doctorate in Sciences of Social Complexity, Daniel Torrico-Bazoberry, was published by the international magazine for the study of social arthropods, Insectes Sociaux, standing out in an editorial about the article.

Maternity and reproductive strategies can have important repercussions on mothers’ behavior which, in turn, has effects on both animal and human societies. In this context, Torrico’s work points out that Alchisme grossa is a species of membrane (relatives of the leafhoppers) that exhibit extensive maternal care until at least the third stage of development of the offspring (nymphs). Often, a secondary membrane female is observed near a family (the primary female caring for her progeny). The presence of this secondary female can be explained by three mechanisms: intraspecific brood parasitism, community breeding, or alloparental care. To distinguish between these phenomena, the authors performed kinship analyses using genetic techniques (polymorphic microsatellites) on samples from groups that include a primary female of A. grossa, a secondary female and associated progeny. In addition, they characterized the behavioral interaction between both females during maternal care and the reproductive strategy (monandry or polyandry) of A. grossa females by estimating the number of male parents. 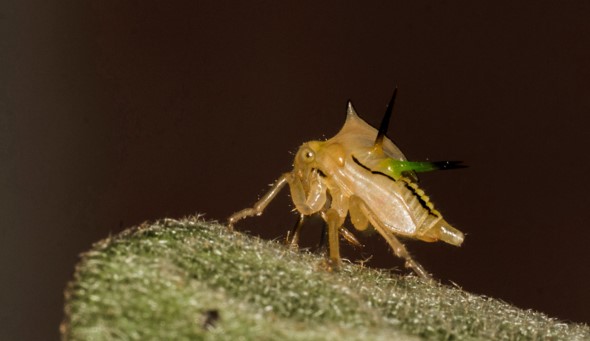 The presence of secondary females was observed in 35.9% of the monitored families. The behaviors characterized among the females (aggressive and defensive behaviors of the mother) suggest that the operating mechanism is clutch parasitism, that is, that the secondary female would try to place her eggs in the nest of other females of the same species instead of creating her own nest. However, all the offspring of a family were descended only from the primary female and a single male, which shows that A. grossa females are monandric, i.e., they mate with a single male.

It is important to mention that the knowledge acquired in this area will be applied to the first chapter of the DCCS student’s doctoral thesis, evaluating the behavioral changes that motherhood can generate in individuals of our species.