Interdiscipline is the central axis for the work at the Research Center in Social Complexity (CICS) of the Faculty of Government, UDD. In this sense, its institutional relations seek to generate knowledge that allows a holistic view to flourish, which goes hand in hand with collaborative work between different disciplines. Under this premise, “Behavioral Sciences from a functional perspective” was presented by Dr. José Antonio Muñoz-Reyes, member of the Laboratory of Animal and Human Behavior [Labcah] and director of the Center for Advanced Studies CEA-UPLA, in a new conference of the Labgroup FullCICS. Here, the main lines of research, projects and thesis work associated with the understanding of human behaviour from a functional perspective were presented.

During the event, seven lectures were given by Oriana Figueroa, Gabriela Fajardo, Daniel Torrico (DCCS students), José Antonio Muñoz-Reyes, Pablo Polo, Paula Pavez and Carlos Rodríguez (CICS director), who gave an account of the different projects that are currently being carried out, as well as providing insight into the future work of the researchers and DCCS students working at the LABCAH, with an exercise in methodological triangulation. For Carlos Rodríguez “the projects demonstrate the existence of a work agenda within a group. (…) Interdiscipline allows for different levels of analysis”, emphasizes the researcher. 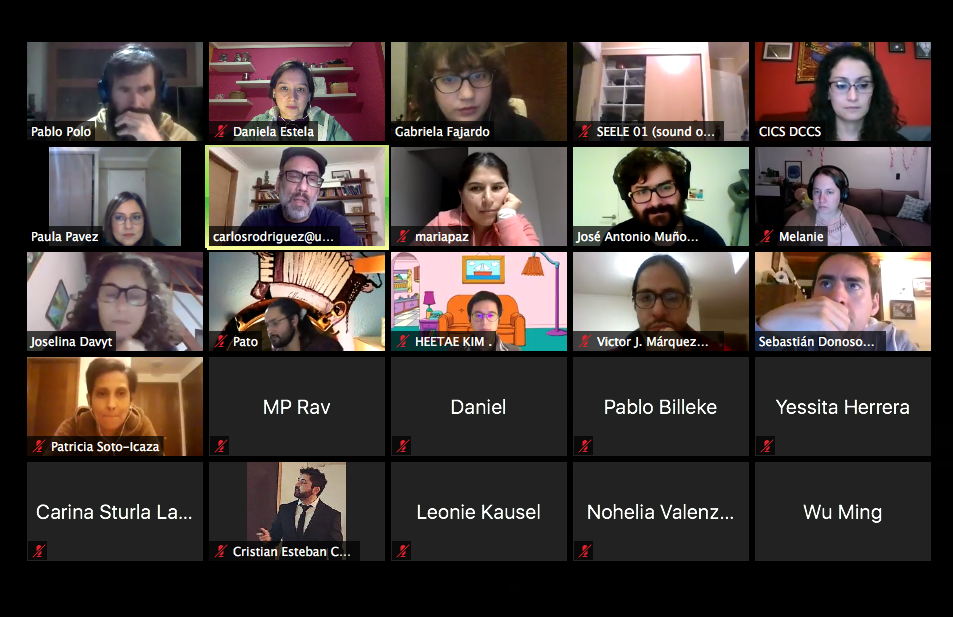 In this sense, research is currently being developed around inter-group conflict; reproductive strategies in humans; and the study of couple relationships from a functional perspective. The Labcah team is funded until 2024 by the recently awarded Fondecyt Regular project, which also seeks to study intergroup conflict in women. It is important to note that the work to test the male warrior hypothesis has only been possible with the participation of a large team composed of female psychologists, biologists, economists and human ethologists.

The current lines of research, which began in 2016, are focused on the study of reproductive strategies in humans. They took as a theoretical framework the strategic pluralism: it gives a functional explanation to the great variability observed in reproductive strategies in humans (monogamy, polygamy and even promiscuity). This broad menu of the human species emerges as an adaptive response to a reproductive effort of how to invest energy in multiple mating or to focus on parental care. This is most clearly seen in male mammals.

A second project is Competitive Altruism as an honest sign: men tend to show more altruistic behaviors when accompanied or observed by women. When altruism is visible, it would have more costs for the subject, but would be validated in the group (gaining popularity and status) and more desired.  The objective is to test whether these resources – material, income; (potential) and the willingness to compete to be altruistic and willing to share can be observed in economic games – are related to short-term socio-sexual orientation in men.

Finally, another line of research is related to aggressive conflict within the couple and partner choice: people are paired based on the similarity of one or more characteristics. This process is is called Assortative Mating, whose working hypothesis is associated with matching where it states that people prefer couples that are highly attractive, but end up staying with couples with similar social value, which would be an effect of biological markets that limit access to couples.