“Beyond Performing Arts: Network Composition and Collaboration Patterns” is the title of the investigation done by Yessica Herrera, a PhD student of the class of 2018 in Social Complexity Sciences, who was selected to be part of The Web Conference, held in Taipei, Taiwan.

Given the current global pandemic contingency, the Conference was conducted entirely in digital format. Thus, some of the most prominent and influential researchers, developers, politicians and thinkers in the areas of large data, artificial intelligence, health, computer science, computational social sciences, public policy, law and human rights, came together to reflect on the last 30 years of the Web, sharing the latest research findings and planning for the future of Web-based technologies. The Conference hosted three keynote speakers and numerous research activities, workshops and tutorials were held, also addressing several topics: IAL+IAL+5G, History of the Web, The Intelligent Web, The Renewal of the Web, among others.

In this scenario, Yessica Herrera’s work (done under the supervision of Eduardo Graells-Garrido from the Barcelona Supercomputing Center and Diego Caro-Alarcón from the Data Science Institute, Universidad del Desarrollo), “Beyond Performing Arts: Network Composition and Collaboration Patterns”, was awarded a full student grant by Web4Good to give a lighting talk (short 3-minute talk) within the WikiWorkshop, a workshop that was part of The Web Conference. The activity brought together data science researchers who specialize in doing studies with Wikipedia and its derivatives (Wikimedia, Wikidata, etc.) that contribute to the WikiResearch segment. The workshop included panels and talks by lecturers, such as Jess Wade from Imperial College of London, who is researching the gender gap in Wikipedia. 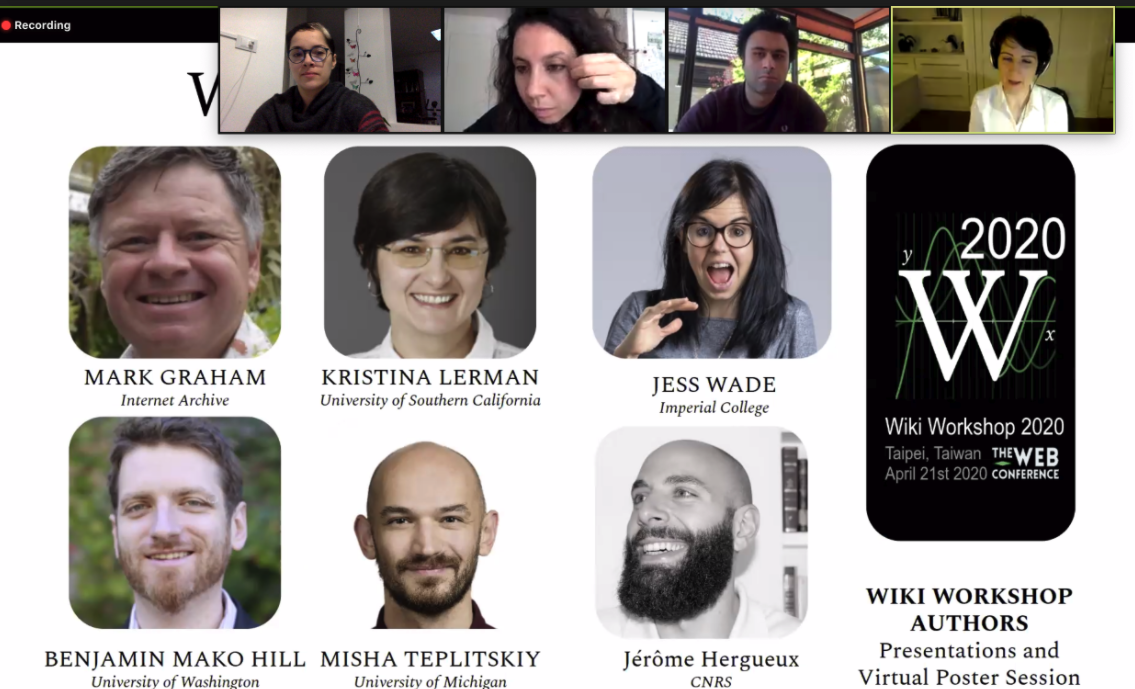 Background to the research work

Yessica’s work proposes the use of information technologies, data science strategies and analysis of complex networks and systems to understand the creation of art. His research contributes to the understanding of a behavior that, until now, is believed to be unique to humans: the creation of art. Specifically, it focuses on the creation of performing arts because it is a type of social behaviour that is universal to all societies, that is of interest to the art industry and that has challenges that deserve to be studied, such as gender inequality. Likewise, to try to address issues related to leadership in creative careers, which are difficult to study objectively given their high subjectivity and the lack of consistent records that allow for systematic analysis.

In her preliminary research project, the DCCS student proposed the use of historical records to investigate the most relevant works of performing art. Only ballet and opera were selected because they have the most consistent encyclopedic records, share similar origins, and both remain active in Western societies. Then, the network of artists who collaborated in the production of new ballets and operas was reconstructed with data obtained from the Wikidata consultation service. A real-world network drawn from the historical repertoire of the Pittsburgh Ballet Theater (the PBT), a United States ballet company, was also used. The research was limited to describing the composition of the network and obtaining general network metrics. It was expected to find a specific network composition according to the proportion of collaboration described at a theoretical level in the performing arts, as well as finding similar collaboration patterns between each type of performing art studied.

In collaborative networks between artists, an artist is considered to have collaborated with another if they worked together to create the same work of art. The networks were studied in a static way, this means that all the historical data were integrated into the network as if it were a still photo. Thus, the analysis of the Wikidata networks revealed that composition by type of artists in opera consists mainly of collaborations between composers and librettists, while for ballet, different types of artists are required: choreographers, composers and costume designers, among others. Analysis of the PBT network showed a more even composition of artist types, although this network represents the individuals who work to stage each ballet and not just create new works, like those on Wikidata.

The Wikidata networks also showed a greater number of isolated components, but this was not observed in the PBT network. This may be just an artifact of Wikidata coverage, with more profiles but fewer contributions. This reduced the possibilities of doing more detailed network analysis. However, the research aims to be a good starting point for overcoming the challenge of analysing collaborative behaviours in the context of the performing arts. 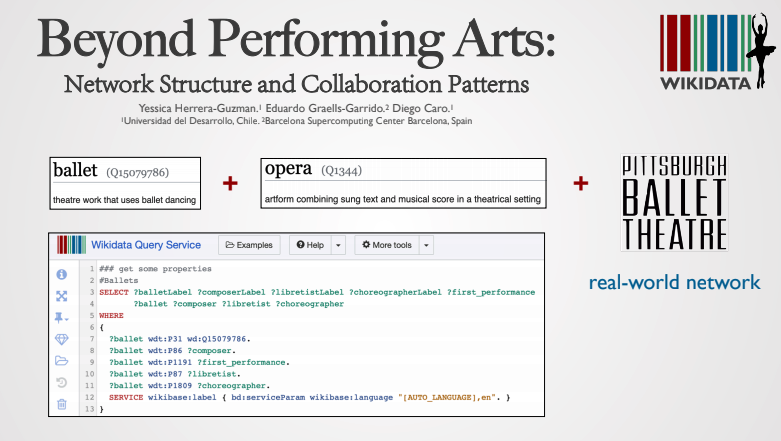 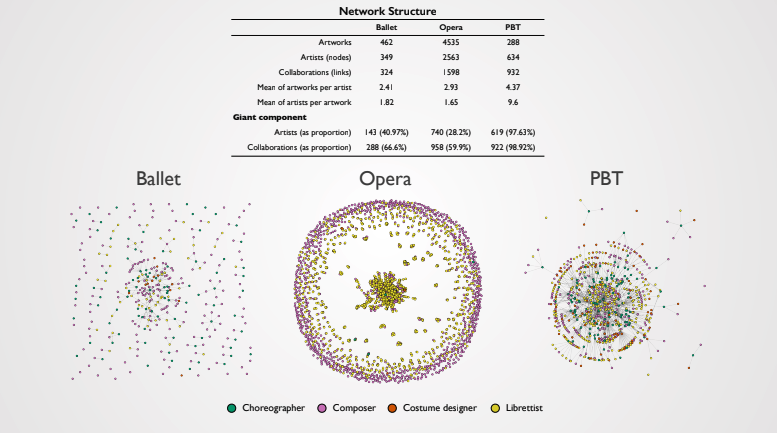 Although the work will not be published, there was much interest from the audience and important links were made to continue the research. For example, the findings helped to highlight the different types of collaboration that exist in the performing arts and the importance of the specificity of the model in order to have strong conclusions about performing arts collaborations. Among the future research interests, the precise modelling of performing arts collaborations is proposed in order to analyse whether the structure of Wikidata really reflects the patterns of collaboration between performing artists (Wikidata on Performing Arts: https://www.wikidata.org/wiki/Wikidata:WikiProject_Performing_arts/Data_structure and related projects https://meta.wikimedia.org/wiki/Grants:Project/Fjjulien/Modelling_and_Populating_Performing_Arts_Data_in_Wikidata). There is also a wide interest in extending the gender gap analysis in Wikipedia for the specific context of performing arts (Women in red: https://en.wikipedia.org/wiki/Wikipedia:WikiProject_Women_in_Red).

The Web Conference (formerly known as the WWW conference) is an annual international conference on the World Wide Web.

Since the invention of the World Wide Web in 1989, The Web Conference (formerly known as The WWW Conference) is an annual international conference on the World Wide Web. This conference has been the main venue for addressing the evolution and current state of the Web through the lens of computer science, computer social science, economics, public policy and Web-based applications. The Conference brings together academics, researchers, policy makers, practitioners and end users with a unifying goal: to visualize and create the future of the Web.

The conference started in 1994 at the European Council for Nuclear Research (CERN) and is organized every year by a local team of volunteers in different parts of the world, in collaboration with the Steering Committee of the International Conferences on the World Wide Web (IW3C2). The Conference aims to provide the world with a high quality forum for debate and discussion on the evolution of the Web, the standardization of its associated technologies and the impact of these technologies on society and culture. (Source: https://www2020.thewebconf.org/).