John Gray’s “Men are from Mars and Women are from Venus” is a book that reflects the many differences we have with the male gender, mainly in the way we deal with various situations. Oriana Figueroa, student of the Doctorate in Sciences of Social Complexity, psychologist at the University of Santiago and who has dedicated her career to the study of Evolutionary Psychology, emotions, Mating, and Game Theory, had the concern to take a step further in the analysis of the relationship between men and women and, especially, to elucidate the universe of men. 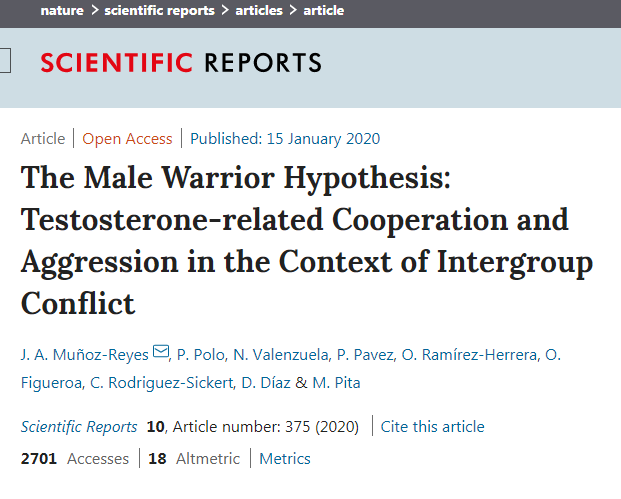 It is in this context that the article The Male Warrior Hyphotesis: Testosterone-related Cooperation and Aggression in the context of Intergroup Conflict, written by Oriana together with the director of the CICS, Carlos Rodríguez-Sickert, J.A Muñoz-Reyes, P. Polo, P. Pavéz, O. Ramírez-Herrera, D. Díaz and M. Pita, captured the attention of the Nature Magazine, recently publishing the work in Scientific Reports. The research was born under the auspices of a regular Fondecyt project of the Laboratory of Animal and Human Behavior (Labcah, as its Spanish acronym) of the University of Playa Ancha, framed in the line of research of the Principal Investigator and one of the tutors of the student DCCS, José Antonio Muñoz-Reyes. His studies focus on aggression and cooperation in men, within a theoretical framework that exists in the field. The aim was to test the hypothesis of the male warrior, which states that men, unlike women, have much more facility to form coalitions and plan when it comes to defending their group’s resources (hunter-gatherer societies) against an alien group.

The theory says that both collaboration in the groups we belong to and hostility towards outside groups evolved together. With controlled experimental conditions, the objective was to see how men behaved when they were put in a scenario of intragroup and inter-group conflict, this being the general framework of how this paper was born. In this respect, Oriana assures that “I have received a lot of support from the Laboratory team in the development of my papers, but today I am able to produce my own knowledge in a more autonomous way. This marks a very important milestone for me in my doctorate and in my career, because it is published in a very good journal”.

Some results showed that the more muscular men were more aggressive in conditions of conflict; and they also cooperated more in the game of public goods when a condition of inter-group conflict occurred. And that relationship was inverse when it occurred in the intra-group conflict, for example, cooperating less, which is consistent with the theory.

From February to May 2020, the student of the 2017 generation of the DCCS, will be doing an internship in the CEACO research group (Brain, Affection and Cognition) at the Universidad Autónoma de Madrid. There, Oriana will learn a new technique, another theoretical framework and the making of electrophysiological records, as she will study the dark triad of personality with evoked potentials. Her professors will be Luis Carretié Arangüena, an expert in psychophysiology, and Miguel Pita, a Doctor in Genetics and Cellular Biology.