In the framework of climate change and efforts to lessen its effects, the researcher, with a PhD in Engineering Sciences, mentioning Chemical Engineering and Bioprocesses, who was part of the Chilean pavilion at COP25, talks about the latest report of the High Level Panel for a Sustainable Ocean Economy.

Last November, the report “The Future of Food from the Sea” by the High Level Panel for a Sustainable Ocean Economy was released. Given the seriousness of the current global environmental crisis, it is urgent to know where to get food for the whole planet, and that this food is also rich in Omega 3, proteins and minerals. In this scenario, the document concluded that, “with better management and technological innovation, the ocean could provide six times more food than it provides today, equivalent to more than two-thirds of the animal protein needed to feed the future world population” (Source: Food and Agriculture Organization of the United Nations [FAO]).

The conclusion is striking after the many suggestions made by different entities to preserve the seafloor and the extraction of its resources. In this context, Alex Godoy, an academic from the Faculty of Engineering and a member of the Doctorate in Social Complexity Sciences(DCCS), who is part of this Panel of Experts and who also participated in the Conference of Parts (COP25), clarifies the statements of the report with respect to getting more out of ocean fishing.

To mitigate the consequences of climate change, one of the proposals is to reduce meat consumption, but “given that there is no food that can compete with the nutritional benefits of meat, we are looking to the Ocean,” says Godoy. “The problem of fishing is not only related to the volumes of extraction, but also to how it is extracted,” he says, noting that potential “sea farms” are currently being studied, which could provide enough protein to replace meat consumption and land exploitation.

These sea farms, which would allow faster reproduction, are focused not only on fish, but also on the cultivation of macro-algae which, when maintained in constant growth, allows the generation of more biodiversity. In the same way, there would be seafood crops, which allow having seed banks. “The farm itself must allow for sustainability. But if it is done today, of course, it threatens the environment,” says the academic. 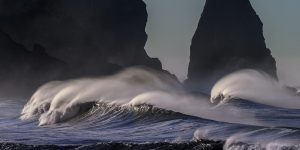 He assures that there is also an issue of nutritional and social change because “just replacing it will not be enough, and it will be over-exploitation: there must be diversification of products, and not focus on the same known species. This should be promoted in countries with large coastlines, and aim at sustainable fisheries and marine farms, which, in addition, “could be an important source of income for countries with coastlines, which are generally more vulnerable. Godoy stresses that “we must encourage local economies: local production of food for local consumption, (…) but that is more of a political issue”. The idea is “to discourage exports and cheaper prices”, since this basically happens because “the social and environmental impact of this massive food production has not been internalized, where we do not pass on the cost of environmental damage”, he concludes.

The value of goods and services derived from the ocean reaches 2.5 trillion dollars a year – an amount that is expected to double by 2030. The ocean supports a multitude of sectors such as tourism, fisheries, shipping, shipping and energy production, and is of growing interest to mining and biomedical companies. The ocean feeds 3 billion people, who depend on the sea as their primary source of protein (Source: oceanpanel.org).