Last Tuesday, October 1 and Wednesday, October 2, the International Seminar “Child Welfare in Chile: contributions from the School” was held in Santiago and Concepción, respectively, whose objective was the presentation of the International Study on Child Welfare framed in the ISCWEB 2017-2019 project (International Survey of Children’s Well-Being). The research was awarded in the 2018 UDD Interfacultades Contest by the Centro de Estudios en Bienestar y Convivencia Social ([CEBCS] center for studies in welfare and social coexistence) of the Faculty of Psychology and the Research Center in Social Complexity (CICS, as its Spanish acronyms) of the Faculty of Government, thus doing collaborative work. 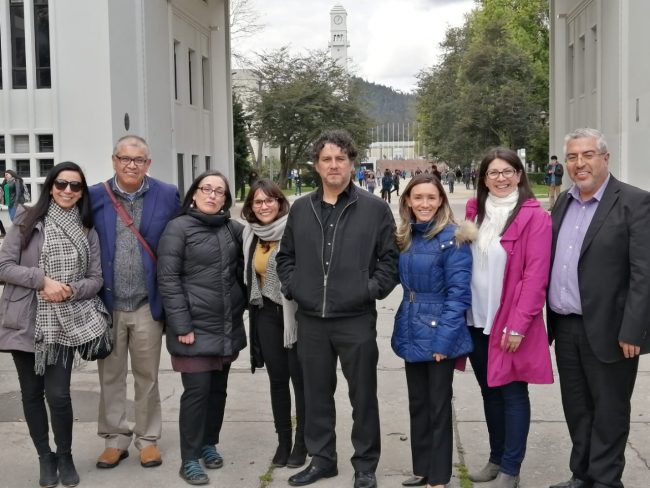 The speakers were Dr. Jorge Fábrega, the Doctorate in Social Complexity Sciences (DCCS, as its Spanish acronyms) Director, with “Measurement of the school climate through anchor  bullets for Chilean adolescents”; María Victoria Benavente, CEBCS Associate Researcher, together with Tamara Yaikin, CICS General Coordinator, presented jointly “Results of the International Study on Child Welfare (ISCWeB Project 2017 – 2018); in addition, Jaime Alfaro, CEBCS Director, presented “Age and links in Welfare and Social  Coexistence”. Similarly, the Seminar was attended by the outstanding researcher, PhD Livia Bedín, from the Institute of Psychology of the Federal University of Rio Grande do Sul (UFRGS), Brazil, whose presentation was “Indicators of subjective well-being in childhood and adolescence in Brazil”.

The Children’s Worlds: ISCWeB project consists of a worldwide research on the subjective well-being of children, implemented with the objective of gathering solid and representative data about their daily life and activities, the use of time and, in particular, their own perceptions and evaluations of their well-being. The purpose is to raise awareness among children, their parents and their communities, but also among opinion leaders, decision makers, professionals and the general public on Child Welfare (Source: Descriptive report research project: international study on child welfare 2019).

It corresponds to the 3rd version of this study, in which 32 countries participated, such as Israel, South Korea, Spain, Brazil and Chile, to name but a few, whose data production in Chile was carried out during 2018, with the support of the Directorate of Research and Doctorates (DID) of the Universidad del Desarrollo. Twenty six schools from different municipalities of the Metropolitan Region and the Bío Bío participated, with a total of 2,938 students, 944 of that total coming from 3° Grade  (8 years), 960 from 5° Grade (10 years) and 1,034 from 7° Grade (12 years). Of these, 48.2% were girls, and 51.8% boys; 48.5% belonged to educational institutions in the Metropolitan Region. It is important to note that these ones were randomized.

Three versions of questionnaires were used (for each age group), which differed both in their length and in the query format and measurement scale. The ISCWeB questionnaire address a wide range of aspects of life categorized in twelve sections: about you; your home and the people you live with; about the home where you live in; your friends; school; how you feel about life as a whole; about the money and the things you have; about free time; some things about how you feel with life in Chile; and other things about themselves.

Other results show that, as adolescents growth, their well-being would tend to decrease. In the same way, it is observed that regarding life in the school, the area 5th-and-7th-grade boys and girls report the highest level of satisfaction is related to the quality of education they receive from their teachers. However, the area they are least satisfied with is their own school performance.