At the beginning of the month, the Research Center in Social Complexity (CICS) Director of the Faculty of Government of the Universidad del Desarrollo, Carlos Rodríguez-Sickert, gave a keynote talk entitled “Social Sciences: The era of interdisciplinarity” in the framework of the III Symposium “Interdiscipline: Tool for the production of knowledge, mechanism of public policy”, organized by the Doctorate in Processes and Political Institutions of the Adolfo Ibañez University (UAI).

In his presentation, Rodríguez-Sickert began by introducing Humboldt and his work in Kosmos as the author that we should look more closely to understand the background of an approach to the understanding of the world that, contrary to his contemporaries whose commitment was focus on consolidating disciplinary feuds, put the emphasis on the definition of interdisciplinary research, as “a research mode by teams or individuals that merges information, data, techniques, tools, perspectives, concepts and/or theories of two or more specialized disciplines or bodies of knowledge in order to advance in the fundamental understanding of a phenomenon or to solve problems whose solutions are beyond the scope of a single discipline or area of ​​research practice”. 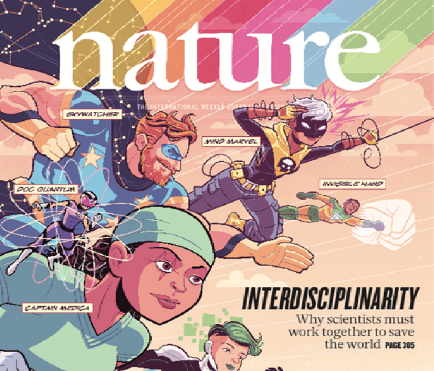 In this line, the researcher assured the basic principle of interdisciplinary is “the commitment to synergy associated with the collaborative implementation of approaches/methods of diverse disciplines for facing a common problem”. He also delved into how the magnitude of this synergy depends on the depth of the interdiscipline, placing the multidisciplinary at the lower as a space where different disciplinary approaches to a given phenomenon simply coexist, but the dialogue can constitute a seed for the development of properly interdisciplinary work, where a unified approach emerges that gives us a deeper understanding than which would give us the work of disciplines in an isolation manner.

His presentation concluded with the question “Should it be interdisciplinary?” In this regard, and largely inspired by the experience of collaborative work that has been developed in the CICS by its researchers and by students of the Doctorate in Social Complexity Sciences, the researcher pointed out that, if the objective is to achieve a unified understanding of behavior and social cognition to address the challenges of an increasingly complex society, it would be necessary to be “interdisciplinary”, although the complexities associated with the management of diverse teams should be addressed and, therefore, to invest in the creation of a tolerant environment and in the search for a common language which facilitates mutual learning.

The Doctorate in Processes and Political Institutions of the UAI organized this Symposium for a third consecutive year, intended as a space for discussion about interdisciplinary approaches and techniques, both as a way of producing knowledge about social and political phenomena, as well as a modality to promote collaboration and the effectiveness of public policies.

Other exhibitors who gave keynote talks were Andrea Repetto, from the Adolfo Ibáñez University, who presented “Women in Chile: Advances and Challenges”; Lukas Meyer, from the Universität Graz, with “Fairness Most Relevant for Country Shares of the Remaining Carbon Budget”; and Loreto Cox, from the Center for Public Studies. “Multiplicity of approaches to good public policy.”