In 2019, 154,366 young people applied for the Sistema Único de Admisión ([SUA] single admission system) which includes 41 universities, and establishes a student selection system of a standardized, common and simultaneous character, within it applicants choose up to 10 career preferences and institutions. Of these, 52,8% were women (Figure 1). Regarding this, the director of Educación 2020  Education Policy, Nicole Cisternas, notes that “(…) in recent years in Chile there has been a growing increase in access to higher education, that is, today about 40% is in higher education and, therefore, there is an explosive increase of all students and probably the greater access of women is also being balanced ”(Source: El Mostrador).

Figure 1. Number of applicants per year. Colors represent gender. (The figures may differ from those published by the Ministry of Education, since DEMRE only considers the institutions ascribed to the SUA.)

Against this backdrop, the Research Center for Social Complexity (CICS, as its Spanish Acronym) of the Faculty of Government of the Universidad del Desarrollo – together with the Ministry of Education’s Division of Higher Education (Divesup) and Acción Educar – decided to take action and, with data provided by the Departamento de Evaluación, Medición y Registro Educativo ([Demre] department of evaluation, measurement and educational registry), presented in the IDeA I&D 2019 contest the “Interactive Platform for decision making in Higher Education” project, whose result was the award of a Fondo de Fomento al Desarrollo Científico y Tecnológico ([Fondef] fund for the promotion of scientific and technological development) to develop and implement the tool. The project, conceived by the CICS researcher and postdoctoral researcher at the Kellogg School of Management, Cristian Candia, derives from his doctoral thesis related to the area of ​​Computational Social Science, whose successful development has earned him this state recognition.

The participating researchers – Carlos Rodríguez-Sickert and Cristian Candia, as director and alternate director respectively, together with Tamara Yaikin and Flavio Pinheiro, as researchers – considered that the development and evaluation of state policies in higher education would benefit from the Data-based decision making – Data Driven Government – and thus increase their effectiveness. In the same way, they realized that the institutions do not have complete information about the system, where the perspective of applicants to the higher education system captures valuable information to, for example, improve the design of the undergraduate offer, the curricular configuration, the way of communicating, capturing and retaining their learners. Finally, they perceived that students lack feedback – given their preferences and characteristics – regarding the coherence of their applications or the possible additional options that they are not considering due to lack of information.

The main objective is to implement the “Higher Education Space” (*) (Figures 2, 3 and 4) in an interactive web platform which allows optimizing the decision-making process of the different actors within the system: i) Applicants, ii) Institutions, iii ) Government. Specifically, the above translates into the decision of students entering higher education through the Sistema de Admisión Única (SUA); the strategic development of the higher education institutions that compose it; and the development of public policies based on a dynamic vision of the institutions network  and their respective programs participating in the SUA. 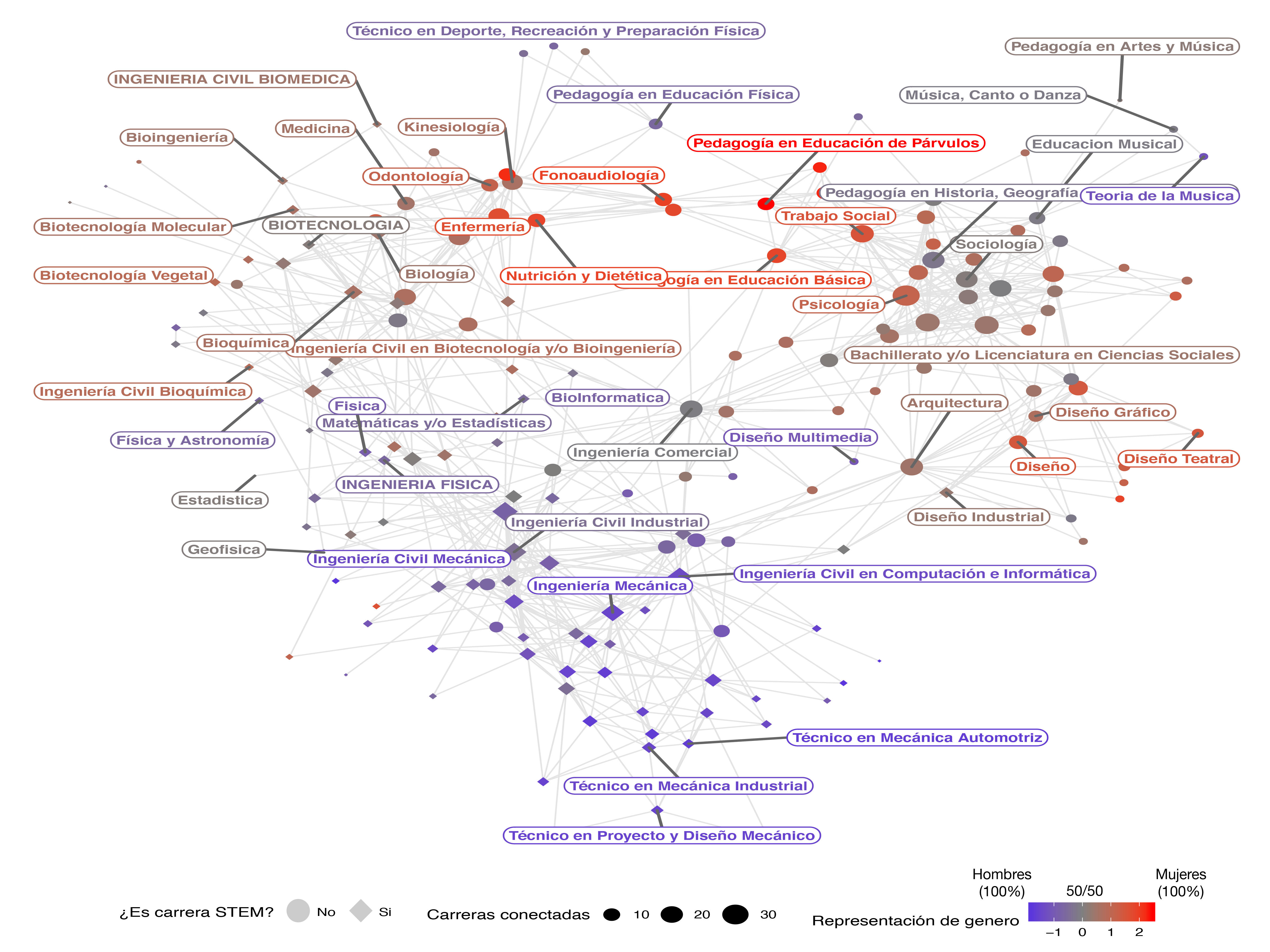 Figure 2. Chilean Higher Education Space. Each vertex represents a career and the connections between them are given by co-nominated careers, that is, if two careers are run simultaneously by a significant number of students, a link is created between them. The colors represent the gender balance (z-score). Blue indicates greater presence of men, red indicates greater presence of women, and gray indicates equal proportion of men and women. The size of the careers indicates the number of other careers to which it is connected. The form indicates whether the career is STEM (rhombus) or not (circle).

Figure 3. Higher Education Space. Each vertex represents a career and the connections between them are given by co-nominated careers, that is, if two careers are run simultaneously by a significant number of students, a link is created between them. The colors represent the gender balance of each career. Light blue means the race has more male presence. Pink means that the career has more female presence. 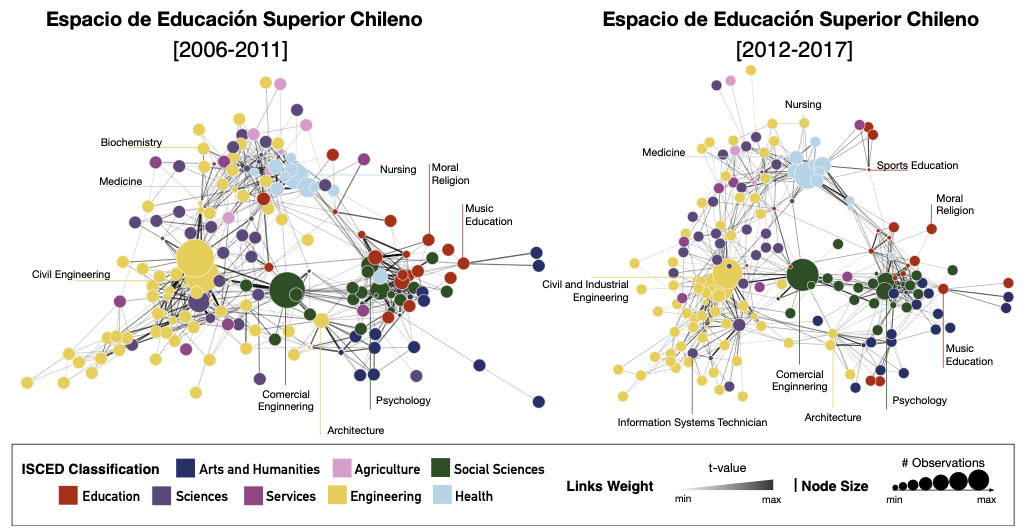 Figure 4. Higher Education Space. Each vertex represents a career and the connections between them are given by co-nominated careers, that is, if two careers are run simultaneously by a significant number of students, a link is created between them. The colors represent the ISCED classification, provided by UNESCO.

Similarly, the research, that is part of the strategic area of ​​the Technological Revolution, Data Driven Government, aims to develop, obtain and make available new knowledge about the Chilean Higher Education System via the Sistema Único de Admisión (SESCH-SUA) for all actors, by constructing a detailed topology of it using data from the applications. Network analysis techniques will be used to map complex systems, based on the student’s application options. The project then targets applicants and/or students, SESCH-SUA institutions and decision makers.

It is expected that within a period of 24 months the Platform for Decision Making in Higher Education will be available to its users.

Not only the CICS researchers were the only ones who had this important award. In their work areas, two members of the DCCS Cloister received state funds:

The IDeA I &D Contest aims to financially support the execution of scientific and technological research projects, in all areas of science that have previous backgrounds supporting a hypothesis of application of a technology, product or service and that, with the development of the investigation, achieve its validation through a proof of concept at the prototype level in a short period of two years (www.conicyt.cl).